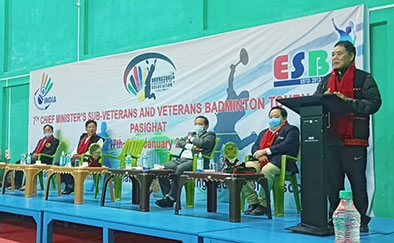 More than 200 players are participating in the championship and achievers of various categories (boys and girls) will be felicitated with prizes and certificates.

In his inaugural address, Libang commended the ESBA for organizing the championship in the true spirit and providing an opportunity to the players to show their skills. He exhorted the youths to grab the opportunity to excel in badminton.

Earlier, ASBA honorary secretary Bamang Tago outlined the activities of the ASBA in the state as well as at the national level.

ESBA president Dr Naku Taloh briefed on the formation of the ESBA and its efforts towards development of badminton in East Siang. ESBA secretary Dr Narmi Darang also spoke on the occasion. (DIPRO)

Decision On IPL Venue To Be Taken After State Government Assurances: Report